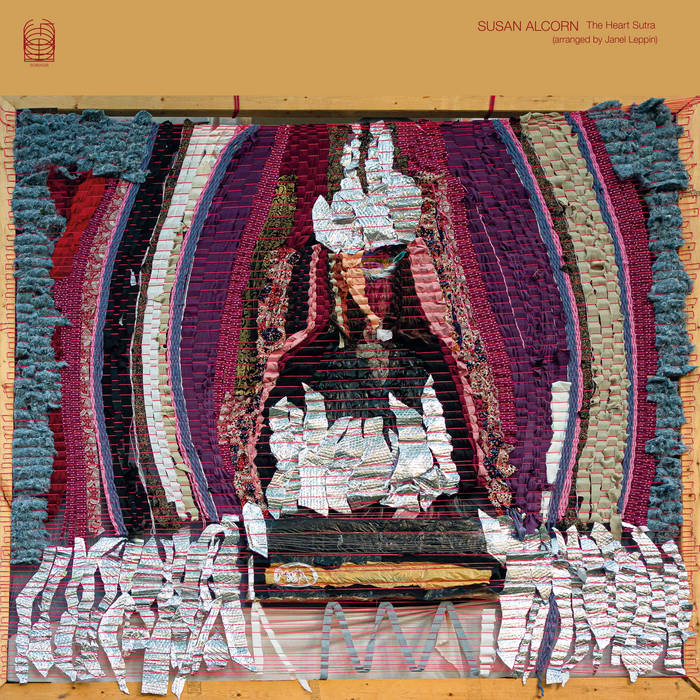 Please note: 'And I Wait the Resurrection of the Pedal Steel Guitar' is only available on digital version.

Legendary pedal steel player Susan Alcorn presents her music as curated and arranged by cellist and composer Janel Leppin. This recording is from a live performance from her residency at Issue Project Room in July 2012. Leppin’s arrangements and curation emotes the brilliance, transparency and resonance of the pedal steel guitar. Through this ensemble, the mastery of Susan Alcorn's compositions shine.

Susan Alcorn has taken the pedal steel guitar far beyond its traditional role in country music. Having first paid her dues in Texas country & western bands, she began to expand the vocabulary of her instrument through her study of 20th century classical music, visionary jazz, and world musics. Struck by the music of Messiaen she began transcribing classical music from recordings and scores on her instrument. Soon, she began to combine the techniques of country-western pedal steel with her own extended techniques to form a personal style influenced by free jazz, avant-garde classical music, Indian ragas, Indigenous traditions, and various folk musics of the world. By the early 1990s her music began to show an influence of the holistic and feminist “deep listening” philosophies of Pauline Oliveros. As her records gained a cult following she moved to Baltimore, MD. She performs internationally and is a key figure in the free improv scene in the US.

Janel Leppin is a core member of the Washington, D.C. experimental, jazz, punk and improvisational scenes and is a celebrated visual artist as a weaver. DownBeat Magazine describes her as “An absolute virtuoso”, NPR Music says “instrumental intimacy swept up in arrangements that cluster around her voice, as delicate and as imposing as a sheet of falling ice.”. Janel leads and writes for her free jazz sextet, Ensemble Volcanic Ash “a rarity..ahhh-vant garde at it’s finest." -Capital Bop. Leppin and Alcorn also recorded the composition “Thick Tarragon” by Eyvind Kang from the album Visible Breath on Ideologic Organ. Leppin appears as a string arranger on many recordings on labels from Dischord Records to Sacred Bones.

"I was introduced to music at an early age and have been playing music since I was three years old when I sat underneath my mother’s spinet piano and pressed the foot pedals while she played and sang classical and church music in our living room. In grade school I played viola, in middle school cornet and then guitar; then at the age of twenty-one I found the pedal steel guitar.

Of all the circuitous paths through life, music is the one I chose (or perhaps it chose me) - there has always been a certain magic, feeling the vibrations through my bones as a child and now as an adult. With that magic, there has always been, for me, a need to wade deeply then swim in those vibrations and communicate what it feels like - an experience beyond pleasure or pain, beyond emotions. A feeling of transcendence but also of being rooted like a tree in the earth below. A connection with that mysterious universe of musical vibrations, vibrations within vibrations, and the spaces between in which stillness is only relative.

I view the instrument I play, the pedal steel guitar, not as an object to be mastered, but as a partner with which to share with the listener a meaning, depth, and hopefully profound awareness of each fragile moment we’re together. It is this dynamic of which I try to be cognisant in both my writing and performance.

There are basically four directions to the music I play and have played for years - the composition and recording of my own music, adaptation of adventurous works of music written by others that speak to me in a personal way, free improvisation with like-minded musicians, and collaborations with various outlier musicians on the fringe of music and society who have important things to say. as an object to be mastered, but as a partner with which to share with the listener a meaning, depth, and hopefully profound awareness of each fragile moment we’re together. It is this dynamic of which I try to be cognisant in both my writing and performance.”

Suite for Ahl is dedicated to MJ Miguel Kenney

Curandera: A Woven Portrait of Susan Alcorn by Janel Leppin / Photography by David Lobato
Photos and video at IPR by Daniel Sharnoff

Thank you Stephen O'Malley and Peter Rehberg for releasing this very special concert. Lawrence Kumpf for organizing this residency & Issue Project Room for cooperation with this release.
Bob Bellerue for recording the concert at IPR, Mike Reina at The Brink for mixing and mastering,
Daniel Sharnoff for professional photography and video, & David Lobato for the cover photograph of Curandera. Deepest gratitude to my husband Anthony Pirog, Jessika Kenney, Eyvind Kang, Skúli Sverrisson & Doug Wieselman who played with utmost finesse.
I am forever grateful to Susan Alcorn for asking me to arrange her gorgeous and very moving music for her residency. It is an honor to call Susan both a teacher and a friend.
–Janel Leppin